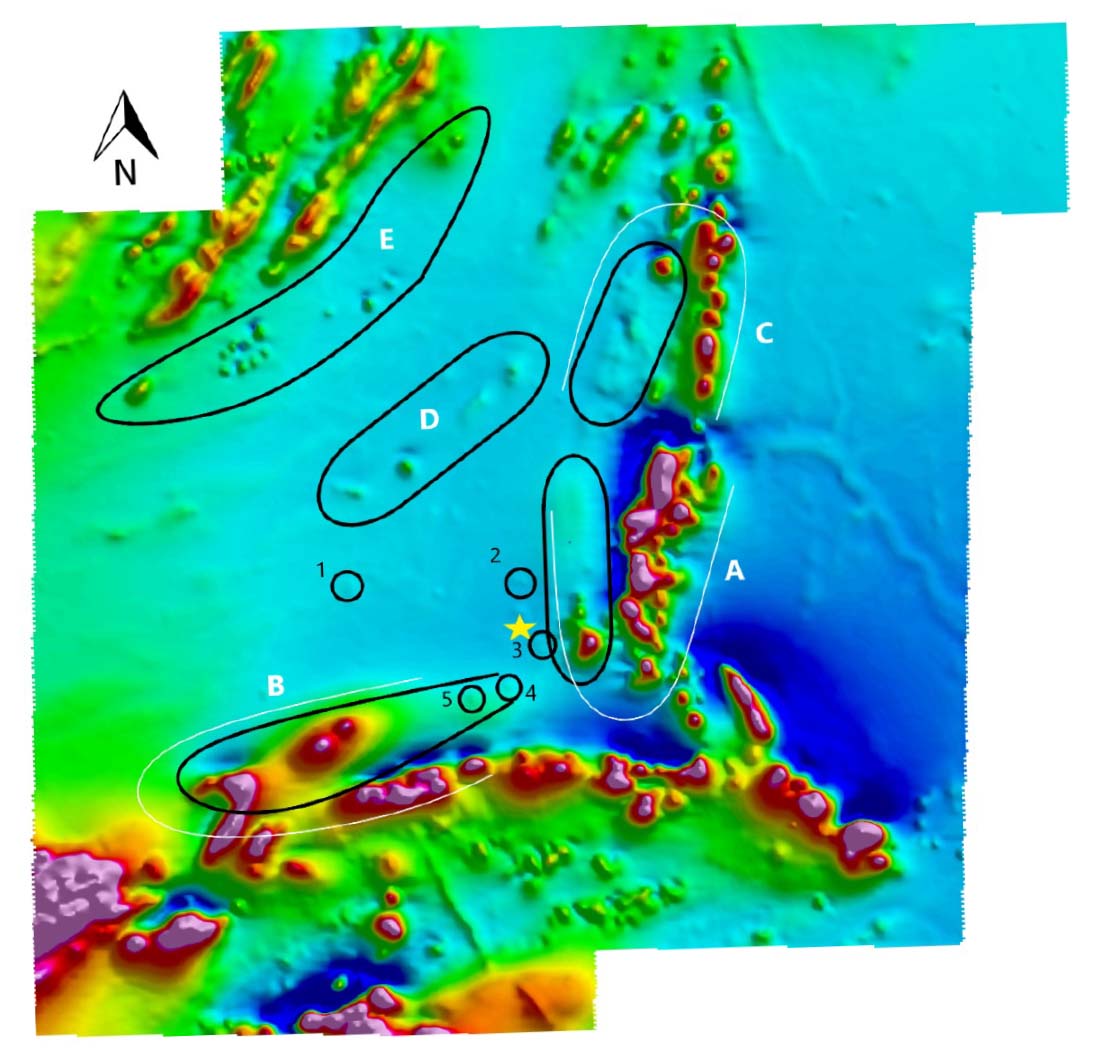 The results from the UAV drone magnetic survey identified three (3) massive VMS source systems, and all are a folded nose trend with a Hinge as identified in Figure 1 in white: as Hinges A, B and C.  The folded nose trends are depicted in white in Figure 1 (above), while the Hinge targets are depicted in black polygons adjacent to the folded nose. In addition, the drone survey has uncovered and defined two (2) new Spruce Lake formation target systems identified as D and E (Figure 1).  These five (5) targets are aligned with the northern and southern contacts in the geological mapping previously reported.

Patrick J Cruickshank, MBA – CEO & Director stated “it is just incredible that this technology has filtered and removed a lot of the conductive noise in previous magnetic survey images. The similarities to the Brunswick #12 is spectacular; size, surface footprint, Hinge and plunging strong magnetic body extension, but to uncover (2) additional separate Spruce Lake Formation Contact Systems is outstanding. The definition of the images also shows potential footprints of additional Lenses in the magnetic low area of the Boucher Brook Sediments. This exploration model continues to evolve and develop into something quite exciting. We have confirmed none of these Hinge targets have been previously drilled and look forward to testing these exceptional targets in the upcoming drill program later this month. All Hinge targets in the BMC are High Priority Targets and possible sources for our Lens. We will be updating with UAV 3D subsurface modeling geophysics and drill program targeting.”

“The work by EarthEx Geophysical Solutions has been exceptional, the results revealing many high priority “untested” targets in multiple systems, the Boucher Brook and the Spruce Lake Formation respectively. With (3) Hinges now identified, numerous subtle, magnetic highs defined, (possible additional Lens’) we expect to discover additional mineralization within the Boucher Brook system and the California Lake Formation, the most prolific host formation to the VMS event in the BMC” stated Gary Lohman, P. Geo., Director and V.P. Exploration.

In figure 3 (below) you can see the previously announced 1000-line kms UAV drone grid over the lens area VMS targets while figures 2 and 3 show the High-Definition UAV Drone proprietary processed output. 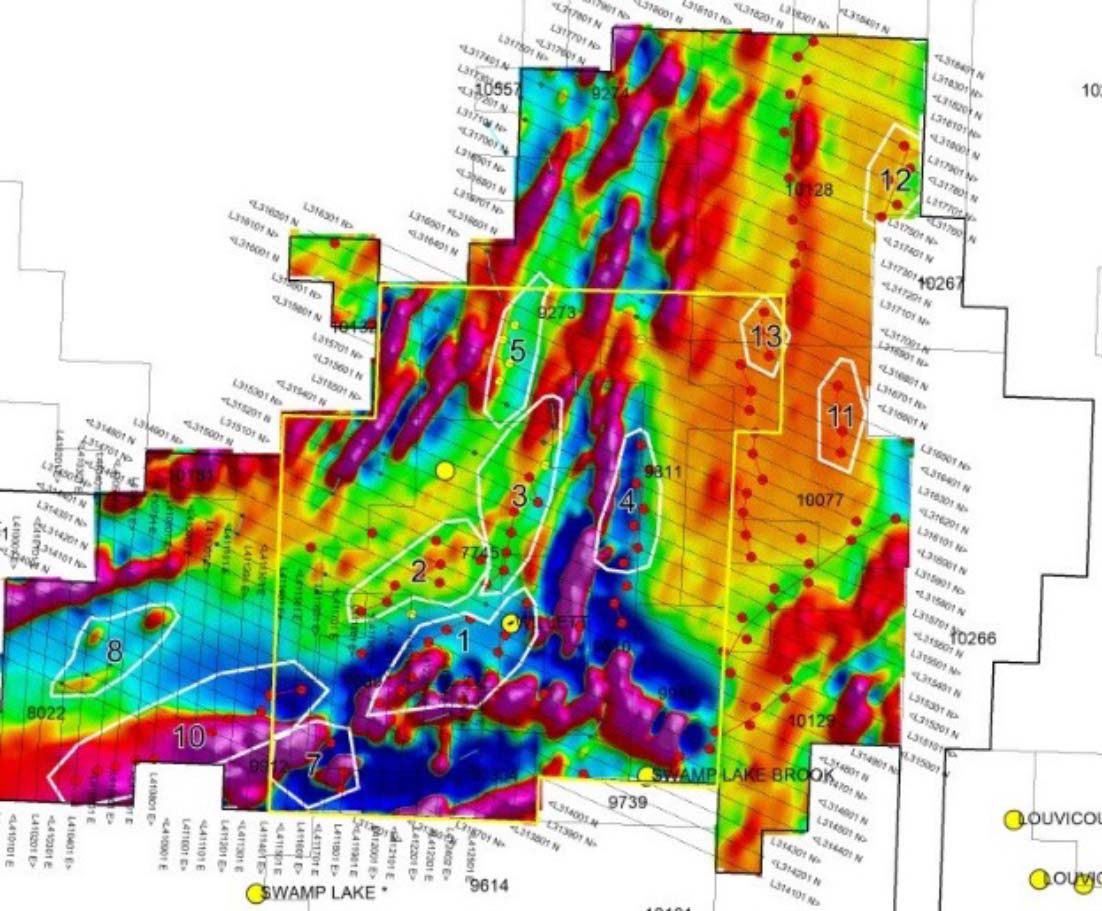 Hinge target A is located 400m – 500m east of the VMS lens.  This fits the traditional Hinge VMS model of the Bathurst Mining Camp (“BMC”), the best example being the Giant Brunswick #12.  This target also has a plunging magnetic signature due north similar to the Brunswick #12 Extension. Additional similarities include a 400-500m surface footprint with a plunging extension within a folded environment. The total length is also similar (approximately 1km). Figure 2 shows the surface trace of the Brunswick #12 mineralization (black) within a folded Hinge on the flanks of a linear magnetic high.

Hinge target B, located southwest of the VMS lens, is a second folded nose and plunging magnetic body to the east towards the VMS lens. Host rocks at Hinge B include both iron formation and felsic volcanics, both characteristic units associated with the BMC VMS model including the Brunswick #12. Hinge target C is located north of Hinge B, the magnetics revealing a folded structure with strong magnetics on the east limb.

In addition to the Hinge targets, the drone survey also identified five (5) very subtle magnetic highs (1 – 5) within a magnetic low identical to the magnetic signature of the VMS lens (depicted as the yellow star in Figure 1). These targets all lie within the same Boucher Brook sediments that host the discovered Lens.

Results of the borehole electromagnetic (“BHEM”) survey have also been received and integrated, the results confirming the presence of a strong magnetic body east of the VMS lens, on the boundary of the survey. The elevated magnetics associated with Hinge B target were not detected since they are well outside of the 200-meter search radius of the drill hole.

From our previous Stage 1 drill program, DDH #7, was a very important technical success. The purpose of the drill hole was to intersect the Rhyolite Cap and confirm a number of VMS model characteristics. For the BMC model, there must be massive sulphides in the cap which was confirmed in the drill core. The presence of copper stringers in the sediments below the VMS lens, along with black chlorite healing fractures in BHEM drill hole #1 and sericitized felsic volcanics confirms that the Footwall Feeder System – is present.

The disclosure of technical information in this news release has been prepared in accordance with Canadian regulatory requirements as set out in National Instrument 43-101 – Standards of Disclosure for Mineral Projects (“NI 43-101”) and reviewed and approved by Gary Lohman, B.Sc., P. Geo. VP Exploration who acts as the Company’s Qualified Person and is not independent of the Company.

This press release may include forward-looking information within the meaning of Canadian securities legislation, concerning the business of Nine Mile. Forward-looking information is based on certain key expectations and assumptions made by the management of Nine Mile. In some cases, you can identify forward-looking statements by the use of words such as “will,” “may,” “would,” “expect,” “intend,” “plan,” “seek,” “anticipate,” “believe,” “estimate,” “predict,” “potential,” “continue,” “likely,” “could” and variations of these terms and similar expressions, or the negative of these terms or similar expressions. . Forward-looking statements in this press release include that (a) we expect to discover additional mineralization within the Boucher Brook system and the California Lake Formation,(b) the definition of the images also shows potential footprints of additional Lenses in the magnetic low area of the Boucher Brook Sediments, and (c) this exploration model continues to evolve and develop into something quite exciting. Although Nine Mile believes that the expectations and assumptions on which such forward-looking information is based are reasonable, undue reliance should not be placed on the forward-looking information because Nine Mile can give no assurance that they will prove to be correct.