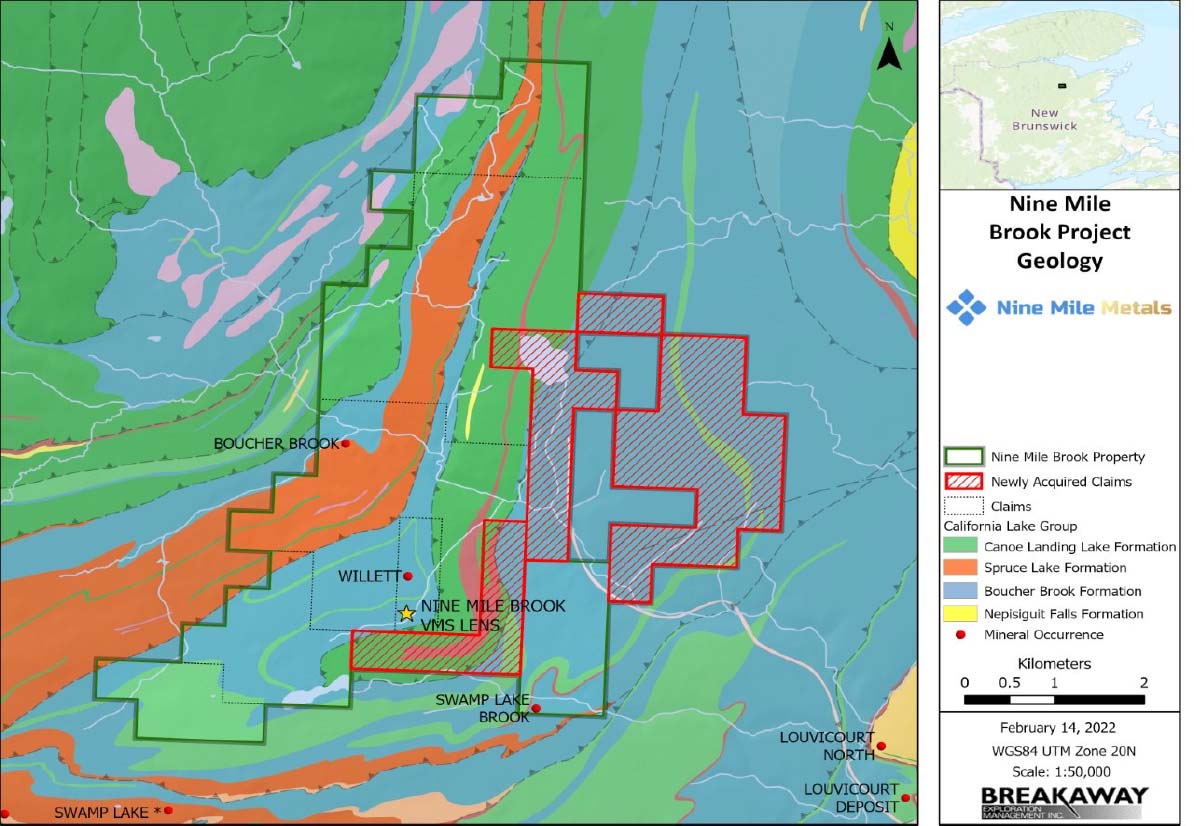 With the acquisition of the New Claims, the Nine Mile Brook Project land package now covers 25.13 km2 and includes a large portion of the prospective California Lake Group stratigraphy and all geophysical anomalies.  The company can now focus on its 2022 exploration program including the integration of the New Claims into the existing 3D geophysical exploration model. The California Lake Group is part of the Bathurst Supergroup, which hosts  the VMS Deposits, more specifically, the Spruce Lake and Canoe Landing Lake Formations host 12 deposits, the highly desirable prospective stratigraphy in the Bathurst Mining Camp. Nine Mile Metals is well positioned in this Formation covered by the Nine Mile Brook & Canoe Landing Lake West VMS  Projects.

The Bathurst Mining Camp is a premier mining jurisdiction in Canada, host to 95 massive sulphide (VMS) occurrences and 46 deposits including the historic Brunswick #12 (335 Mt – operated for 51 years),  #6 Mine (51 Mt) and Trevali Mining Corporation’s producing Caribou Mine (71 Mt ). The Bathurst Mining Camp is considered the 3rd Largest VMS Mining Camp in the World & The Frazier Institute rates the New Brunswick Mining Jurisdiction as one of the World’s Best.

The Company paid cash consideration of $15,000 plus 75,000 common shares of the company, which have a four-month hold legend. In addition, there is a 1-per-cent net smelter royalty (NSR) on the New Claims derived from metallic mineral production. The Company has the right to purchase the 1-per-cent NSR from the vendors for $1-million at any time prior to commencement of commercial production. The vendors are individuals and at arm’s length from the company.

The disclosure of technical information in this news release has been prepared in accordance with Canadian regulatory requirements as set out in National Instrument 43-101 – Standards of Disclosure for Mineral Projects (“NI 43-101”) and reviewed and approved by Gary Lohman, B.Sc., P. Geo. who acts as the Company’s Qualified Person and as the COO of FMC and is not independent of the Company.

This press release may include forward-looking information within the meaning of Canadian securities legislation, concerning the business of Nine Mile. Forward-looking information is based on certain key expectations and assumptions made by the management of Nine Mile. In some cases, you can identify forward-looking statements by the use of words such as “will,” “may,” “would,” “expect,” “intend,” “plan,” “seek,” “anticipate,” “believe,” “estimate,” “predict,” “potential,” “continue,” “likely,” “could” and variations of these terms and similar expressions, or the negative of these terms or similar expressions. Forward-looking statements in this press release include that (a) the New Claims cover the contact between the Canoe Landing Lake and Boucher Brook Formations where the company has identified high priority, strong dipping bedrock conductors to the northeast of the Nine Mile Brook Hi Grade Cu, Pb, Zn, Ag, Au (VMS) Lens, (b) the Nine Mile Brook Project land package now covers 25.13 km2 and includes a large portion of the prospective California Lake Group stratigraphy and all geophysical anomalies, and (c) the company can now focus on its 2022 exploration program including the integration of the New Claims into the existing 3D geophysical exploration model. Although Nine Mile believes that the expectations and assumptions on which such forward-looking information is based are reasonable, undue reliance should not be placed on the forward-looking information because Nine Mile can give no assurance that they will prove to be correct.